Then we did a crazy thing–Ron and the 5 kids came up to Florence and met me there.  We spent a day–Leigh and I went to the Uffizi and saw most of the works of her art project!  My high point was walking into the Botticelli Room and Leigh gasping, “Botticelli!  It’s Venus!  Oh Mom, this is the best day ever!!” as she grabbed me around the waist and hugged me.  We saw the Simone Martini Annunciation that Leigh did a replica of back home, we saw Giotto’s Madonna and Child, we saw Michelangelo’s Holy Family and Raphael’s Madonna and Child with the Goldfinch.  We raided the gift shop, collecting some postcards and a little notebook with a Botticelli on it.
And of course, we ate gelato on the Uffizi steps!  Over and over, Leigh said it was the most exciting time ever. 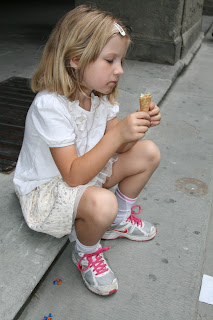 We saw the Duomo, had confessions there, and made our way through San Lorenzo’s street market.  Jake and Ron found the perfect chess board (they had been searching for weeks for just the right one).
Then we boarded a bus to Siena.
We had a marvelous dinner in a trattoria–roasted chicken and roasted potatoes, lasagna, Tuscan white bean stew, and of course, a carafe of table wine.  It was truly glorious.
We all had a day in Siena together–the Feast of the Body of Christ.  We were in the Duomo in Siena.  Truly magnificent, truly inspirational.
The next day, the 2 boys left for a a week.  The program was going to Sicily, but the girls and I could not make the trip for many reasons.  So, we stayed in Siena for the better part of the week.  This had been the reason we were all in Tuscany in the first place: Ron situating the girls with me in a place I wanted to be, rather than on the campus for the week (where I have no car), before he and Jake took off.  And I’ll tell you, it was a GREAT decision!!!!