We went to Mass at the Basilica of San Sebastiano where St. Sebastian is buried. His tomb is above a beautiful statue of his martyrdom. Across from this enclave is another with Bernini’s last statue, Christ as Savior of the World. It is so beautiful. 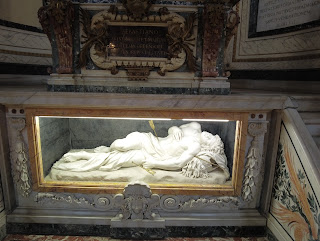 Being in that church was very moving to me. It is one of the oldest pilgrim destinations of Rome. Saints such as St. Catherine of Siena, St. Bridget of Sweden and countless others have gone to pray there.

We named our youngest child “Sebastian” after St. Sebastian because he was martyred twice. After recovering from his near-death execution of being shot with arrows for being a Christian, he challenged the emperor directly and implored him to become a Christian. Surely Sebastian knew this would mean his death. I marvel at someone brave enough to face death knowingly twice–that second time is the courage that I fear I lack and would be so blessed to have.

St. Sebastian, pray for us!