I am scheduled to be on EWTN’s “At Home with Jim and Joy” show today and Friday. It has taken me two days to recover from the filming! The producer had send me a checklist of all the things I needed to have in order technology-wise. Although we have limited resources here in our house in Frascati, we had obtained real WIFI and gotten a LAN line so that the connection would be as strong as possible. I diligently went through the whole checklist, tested and re-tested the connection, had a microphone, earphones, the whole works.

Well on filming day, I suddenly had no WIFI. I told Ron and he came and discovered wires, jumbled and broken, coming out of our wall! 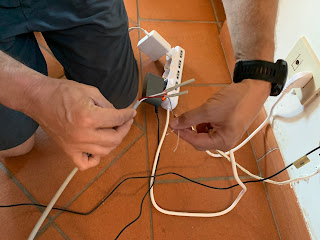 I still have no idea what happened. Our kids covet WIFI so much that I know no one did it deliberately (even to sabotage their mother making a fool of herself on international television). The timing was surreal: 2 hours before the filming.
It just so happened that I had gotten ready early, and was already prepped. So, we shifted to plan B: go to the UD campus and film there. I brought makeup, a wardrobe change, the mike, earphones, computer, phone, connection wires, adapters, the LAN line. . . the works. The kids carried to the car a huge Madonna and Child, a lamp, and a hammer and nails.
It was about the most amazing thing I’ve ever seen–my sweet family worked so hard to help out!
And then they waited so patiently when it went well past their dinner time. We went out to celebrate afterwards–the connection worked well and I was able to share the story of going from being a NYC feminist to becoming Catholic to being an open to life mother–and finding in that vocation my greatest fulfillment.
Uncategorized