We are having a GREAT day. The weather is gorgeous, the kids are playing soccer, and everyone is getting rested and well fed. (If you double click the video, it will play better. See Sebastian’s groovy soccer dance.)


After many failed attempts (some of my kids were sure they did not like pasta carbonara after I messed up so badly), I have finally gotten it down. Here is the Rombs Pasta Carbonara recipe, which avoids egg whites, onion and cream–all “No No’s” in Lazio. This is a recipe for 8 people, so divide it if you are cooking for fewer people. I have affectionally called it Carbonara alla Tuscolana since we live on Via Tuscolana in Frascati. 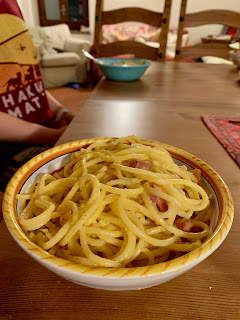 1. Cook the spaghetti al dente.
2. Brown the pancetta and sprinkle some garlic powder on it as it becomes brown, enough to basically coat the pancetta (you can brown fresh diced garlic if you prefer, but we actually prefer the powder).
3. Beat the egg yolks with a whisk and add the fresh grated cheese and stir.
4. When the pasta is cooked, strain it, leaving about 1 cup of the hot water in the pot.
5. In a large mixing bowl, mix together the strained pasta with the egg/parmesan mixture. Sprinkle generously with salt and pepper. Gently mix over and over until the spaghetti strands are coated with the egg yolk mixture. It is important to taste it at this point and make sure it has enough salt; many people really like a good amount of pepper, so don’t be shy.
6. If it is a bit grainy/dry, add one tablespoon of the hot water at a time, mixing after each addition, until the coating on the spaghetti is smooth and velvety.
7. Place a serving of mixed carbonara in each dish. Add more sprinkled parmesan on top if you wish.

Notes:
~Many recipes call for entire eggs but the egg whites make it more slippery and my kids can’t stand it. I experimented until I landed on the 15 yolk solution. I make an egg white omelette out of the whites.
~The trick about the egg is for it to be neither raw nor scrambled. The egg mixture added to the spaghetti just as it is strained heats the egg up enough to raise its temperature without cooking it too much. Recipes all call for different processes, like placing the strained spaghetti back in the cooking pan and mixing the eggs there, but with my equipment, that is too hot and scrambles the eggs. Many other techniques are proposed in the universe of recipes. I find that using a large mixing bowl, mixing immediately after straining, and adding a little bit of reserved cooking water is the magical combination.
~My kids love the pancetta so I use a lot. But if I were cooking just for my husband and myself, I would you less. You do not need exact measurements; just add as much as you like.
~Guanciale is “cheek” and often the preferred meat in our region. Pancetta is perfectly fine and I have even used bacon. Its less Italian but a delicious meal anyway.
~Once you get this recipe down, it is easy and fast. It is the backup recipe in every Italian kitchen and is a great balance of carbs and protein. I’m starting to think that it is the perfect meal.