Yesterday I was driving and Clare pipes up from the back seat: “Mom, when Adam and Eve were wearing those leaves, do you think they were itchy?”
A perfect sensory processing disorder question!
That said, her issues are SO SMALL compared to what they once were!
We have wondered about Clare having each of the above disorders at various times.  We ruled out the first.  Then we ruled out the second (both because she is so good at interacting with other children).  We ruled out the last by taking tests and reading descriptions–she has mild overlap with some of the descriptions, but not enough to classify her.
She really fell apart when we moved to Dallas–she was 3.  She did not smile for a year.  She stomped, growled–her behavior was the worst anyone in our family had had.  I wondered if the move contributed–it was a move, after having a new sister born when Clare was 18 months, effectively displacing Clare out of my lap.  This was after a previous move, which was after being hurricane evacuees when Clare was only 6 weeks old.  Really, she never seemed to recover from the evacuation, and these other changes kept retraumatizing her.
So when she would not smile–that was the straw that broke the camel’s back for me.  I decided that I was going to do anything and everything that I could do.  So I asked her: “Clare, who do you belong to?  Do you belong to Jacob?”  With my prompting, she would shake her head, no.  “Do you belong to Mary?”  “Do you belong to. . . ” we went through the whole list of people she knew.  Then I’d say, “Do you belong to Mommy?”  “YES!” she would answer, and she would start giggling.  Then, all day, every day, for a year, I backed up my little game with my choices all day.  I would ask her to be my buddy when we would all go to the grocery store.  I would ask her to sit with me at dinner.  I would say, “Who do you belong to?”  She would say, “YOU!” and smile.  More than anything, I was WITH her, I LOOKED at her, and was PRESENT for her.
It was an exhausting year.  I accomplished ALMOST NOTHING all year long.  I could not homeschool–Jake and Mary were at Faustina that year.  I hosted the Montesorri school in our home for Clare, but did not make her go if she did not want to.  I just held on to her, made eye contact with her all throughout the day, and kept reminding her that her world was secure, it was safe, and she had a place.  She had a high, important, special place.  And that made her smile.
I knew it was over a year later when she drew her first ever self-portrait, and the face was one huge smile, with bright eyes and big eyelashes.  The brightness of the little stick figure was effervescent.  We still have to “manage” the issues, but I think it will not be something that impedes her life in any way.

Now, it’s hard to wipe the smile off her face!  Look at that glow!! 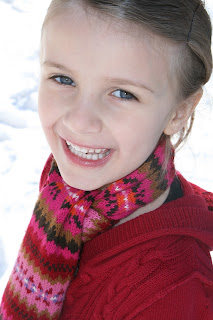