Posted by Kathryn Rombs
In Uncategorized
We had one overnight in Assisi, which was a big experience for me.  There is a lot of grace in that place–it is holy ground.
Our group hit it off well with the monk who led us through St. Francis’ basilica–I actually think it was Jake and Mary who got him going in a conversation, which led to him inviting the whole group behind the closed doors of the cloister–which looks out over Umbria (this photo is courtesy of Mary).  I missed that part, because Annie was too heavy to keep carrying, and so she slept in my arms, while Clare sat beside me, and we had a really good chat about her faith and her life choices. 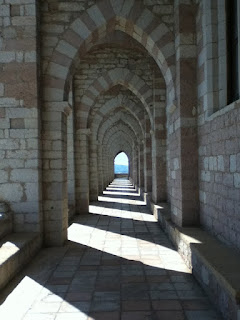 These are St. Clare and St, Francis’ tunics/habits.  Almost brings me to tears–SO HUMBLE and worn. These are not costumes or regular habits as in uniforms.  These are choices to leave the world of wealth and comfort and to embrace poverty.  Again, Clare and I had a remarkable conversation about her future in St. Clare’s church, where these are. 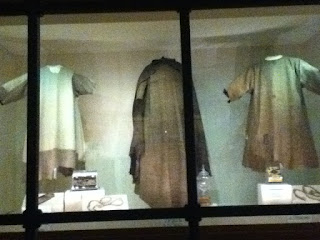 This is the Cross of San Damiano, from which Christ spoke to Francis: “Francis, rebuild my church.”  Francis spent the next several years repairing the dilapidated structure of the San Damiano church.  He then repaired 2 more churches or chapels falling into ruin.  Only years later, when Francis’ order had been established and had grown by leaps and bounds, and was impacting the whole church throughout Europe, did Francis realize that Christ had meant meant for him to rebuild THE CHURCH! 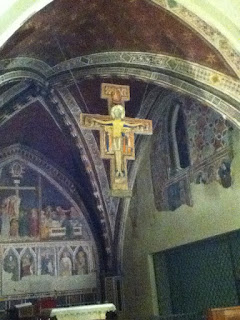 I got very sick in Assisi, and have been sick until today.  But it seemed providential: prayers for which I waylaid heaven months ago during Lent all came to pass.  I could suddenly see so many things that I had been asking God about but could not see.  I think it was the grace of God that has taken up residence in that holy place!  Thank you God for answering my prayers!