We went camping in the Ozarks.  Spur of the moment decision, instigated by, of course, Ron.  It was pure delight: R and R at its best!
Leigh was my “Buddy”: we were inseparable.  She said, “I have four buddies: Mom, Dad, God the Father, and Jesus.”  By the end of the trip, Annie was hugging Leigh constantly.  So Leigh declared: “Now I have 5 buddies!”  Truly, it was a time of great love. 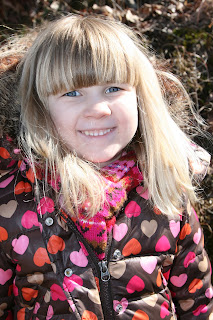 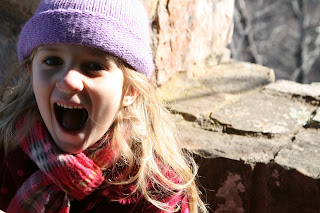 At least we had a nice little cabin: our “castle in the cloud.”  We are now all sold in the idea of cabin vacationing. 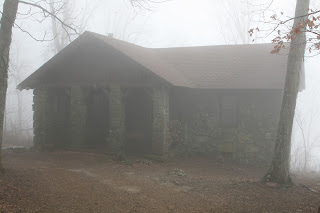 Lots of games, watching the fire, and napping. 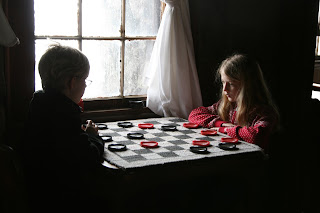 The cabin was at the top of White Rock Mountain in Arkansas.  When I say “The top,” I mean that there was a hundred (AT LEAST) foot drop all the way around the rim, and that is just the peak of the mountain–we were truly in the clouds.
We took a hike around the rim: there was a trail, but it was only about 2 feet wide.  At one point, the kids were joking around a little bit.  Ron said, “Kids, you don’t understand: the woman said to me, ‘I would never take kids on that trail–they might fall off!'”  That was when I realized that we were going against ALL conventional wisdom and truly risking our lives–tripping on a tree root, and down you go!  WOW!!  (The picture does not even begin to reflect the dramatic quality of  much of the trail.) 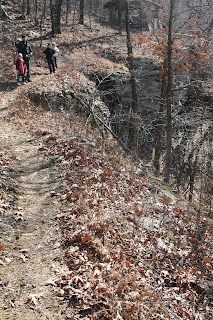 But the kids were amazingly obedient, self-controlled, and loved the views and the fresh air.  They had a blast!  Even Annie enjoyed the ride! 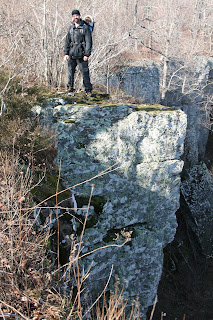 Although at one point, Leigh (whose hand I held every step of the way) said to me, “I think I am too young to be here.  I could get killed.”  I said, “Oh sweetheart, I’ve got your hand.  Nothing’s going to happen to you!”  But five minutes later she piped up, “I think I’d rather be playing Uno.  I’m good at Uno!”  So, so sweet (and smart)!  I love that girl!!
The best things to me besides the time with Ron and the kids were the sunsets and the stars. 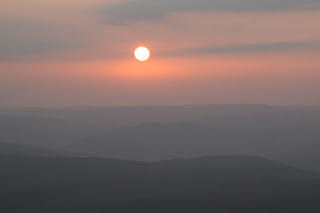 And knitting, which I did almost constantly.
I really needed the rest, and our entire family got a wonderful chance to restore, body and spirit.