Today, despite the oppressive August heat, it will “snow” in Rome. It is the day that the Church commemorates the Basilica of Saint Mary Major. The story goes that in the 4th century, a couple who had not been able to conceive prayed to the Virgin Mary to obtain for them a child. Mary appeared to them in a vision and said she wanted a church built in her honor, and to demonstrate her wish, she would have snow fall on the hill where the church was to be built. The pope had a dream that night to the same effect. The next day, on the 5th of August, it snowed on the Esquiline Hill. The pope immediately began construction of the church. To celebrate the origins of this Basilica, during the High Mass on this feast day, white rose petals are dropped from the dome of the church, reminiscent of snow. One other rose petal dropping is traditional in Rome, red petals falling from the oculus of the Pantheon on Pentecost.

The Basilica of St. Mary Major has dozens of mosaics from the 5th century, the oldest in Rome and one of the oldest in all of Italy (second to Ravenna). The mosaics, originally 42, tell salvation history from Abraham through the birth of Christ. While the mosaics tell the story of Christ as the fulfillment of the promises of God to the Jewish people, Mary is the one through whom the promises are realized. As such, she is celebrated as a regal figure in the mosaics. In 431, the Ecumenical Council of Ephesus affirmed the unity of the 2 natures of Christ (human and divine), and as a result, Mary’s title as theotokos was upheld and re-affirmed (it had been in use since ancient times until Nestorius challenged it). The Basilica of St. Mary Major was dedicated to Mary as theotokos by Pope Sixtus III after the Council.

There is a lot to love about the Basilica we celebrate today, August 5th: the gold on the ceilings is that brought back by Christopher Columbus to Spain and given as a gift by Ferdinand and Isabella of Spain; relics from Bethlehem; and a beautiful ancient image of Mary, under which Pope John Paul II kept an oil lamp lit throughout his pontificate. My personal favorite, however, is the mosaic of the dormition of Mary. Next to the sleeping Mary is the adult Christ, holding the infant Mary, symbolic of holding her soul as she departs this life. It is the inverse of the Madonna and Child image—here, it is Jesus holding the Child Mary. 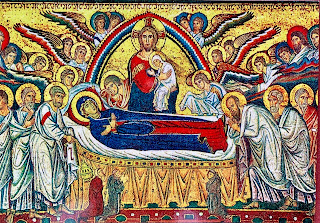 Only Catholics would have a feast day dedicated to a building! To the Protestant mind, it’s hard enough to venerate saints. And now, brick and mortar? But I understand that this ancient site is a sacred space. It heralds and holds the message: Christ is the fulfillment of all of God’s promises to humanity, and that fulfillment occurred through the fiat of a woman and mother. Mary’s “yes” led to the satisfaction of all our desires and the soothing of all our restlessness. God gives us his very self, and he does so through this mother.