This man is incredible. Here we are on my roof caulking up a tiny hole that has been a real nuisance. 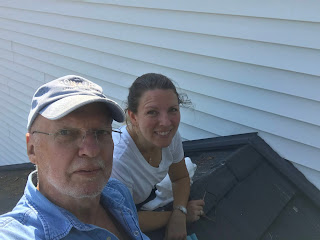 When my friend Emily saw him, standing there in his Wranglers, blue denim shirt and cowboy hat, she said, “It was just like seeing Ron.” They are cut from the same mold.

Ronnie Sr. has his own vocabulary. He “mashes” buttons and brakes. He “slaps on” paint. Anything dry is “bone dry” and anything vast goes “as far as the eye can see.”

I was charged with two home repair projects and Ronnie Sr. said, “Can I come to Dallas to help?” Of course you may. Thank you!

He was able to tackle two projects that our contractor just couldn’t ever commit to. Ronnie Sr. got one of them finished in 48 hours. He did it all himself, without his own tools (which is saying something, since he can only identify two tools he does not own). Thank you, Dad! 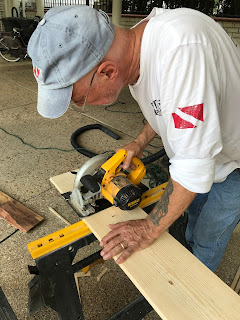 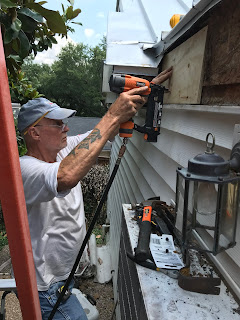