Hobbling to the car to leave for our vacation, Mary looked like all of us felt: drained and driving on fumes.
So running out of gas in the middle of nowhere in East Texas was a perfect indication of where we all are!
I was driving while Ron was working on his Augustine paper in the passenger seat.  We had a quarter of a tank of gas.  I thought: “I’ll stop at the next town for gas.”  There had been a little town every 20 miles or so the whole was thus far, hence my opinion seemed imminently reasonable to me.  Our Expedition was pulling a trailer with our camping gear and mountain bikes, which takes more gas.  Additionally, the car was fighting a strong wind the whole way.  So I knew that the quarter of a tank was not something to rely on for too much longer.
Well, as the red needle approached the “Empty” marker half an hour later, I wondered where the next town was.  Just then, I saw a green sign which read: “Roswell 45 miles.”  What!  45 miles??  I spoke to Ron about it.  At first he joked: Well, we have camping equipment, food–we won’t die out here!  It might be a nice evening under the stars!”  I thought that was a nice place to begin our collective panic.  A few minutes later it started.
“Well, it’s daytime, and sunny, 77 degrees.  So wherever we break down, we’ll call AAA.”
A few moments later: “What if we do not have cell coverage wherever we breakdown?”
In fact, we did not have coverage where we were at that moment.  That is when our stomachs fell out.
“Remember the movie ‘Breakdown?”  And we reviewed the plot.  That was a stupid thing to do.
We kept driving, as Ron cheerfully said: “Well, all we can do is keep going forward, until we can’t go forward any more!  Who knows–maybe we’ll make it!”  I love that Pollyanna streak of optimism in him.  It is such a nice compliment to the Indiana Jones/Surviver Man quality that’s dominant.
Well, we prayed a lot.  The family was reciting Hail Mary’s as we puttered out of gas, on the edge of town.  We had cell coverage, and I was so happy that we could call AAA.  That was all I had really hoped for.
Ron then threw a curve ball: “I’ll bike to the nearest gas station and be back in a sec!”
What?  How many people happen to have their own mountain bike with them when the run out of gas!?
I reminded him of the AAA option.  He looked at me with a queer look and I quickly assented to his proposition.  Helpless suburban girl should always yield to Man Versus Wild guy when possible.
So, off he went:

And so, without calling for help, we got our own gas, then drove to a filling station to fill up for real.  We were a sight in line for bathrooms: messy faces, messy hair, weary faces.
We were in Roswell, the home of the “biggest UFO coverup in history.”  So we went to the UFO Museum and Research Center. 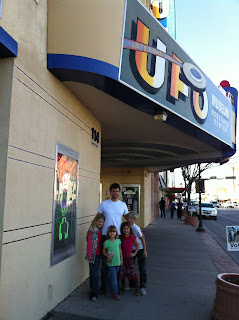 We felt a little more normal in contrast to extra terrestrials!
We finally got in the car and drove the last hour, arriving at a quaint cabin in a resort town that rivals the French alps.  A heavenly destination.  A hard-earned one, at that!