The Summer Rome Program ended with a week in Greece, imitating the Fall and Spring Rome Program’s 10 day trip to Greece.  The Summer Program’s inaugural Greece trip was a smashing success!
It began on a little bus, bumbling up the unspoiled, mountainous countryside of Greece’s mainland, which looks, I imagine, very much like it did one million years ago!  After several hours plus a gas station pitstop where we grabbed some spinach pie (can you believe they sell that at gas stations??), we arrived in the lovely town of modern Delphi on Mount Parnassos. 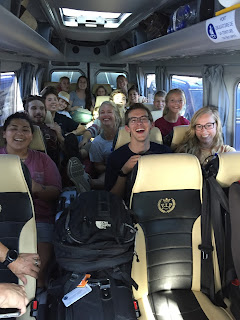 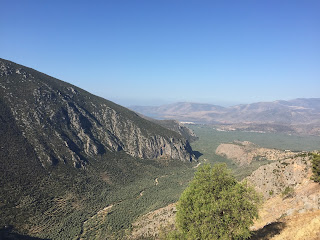 Delphi is the site of the ancient Delphic oracle.  We visited the ruins, which are some of the best preserved ruins in all of Greece.
What an amazing thing for me to walk in the steps of Socrates, who himself visited the oracle, who said to him, “You are the wisest man in all the world.”  He pondered this claim with which he strongly disagreed, since he knew he did NOT KNOW anything.  He finally realized that the oracle must have called him the wisest man in the world because he KNEW that he did not know anything.  Ah, to wash my hands in the same natural spring washing place that visitors have washed in since Socrates’ time!