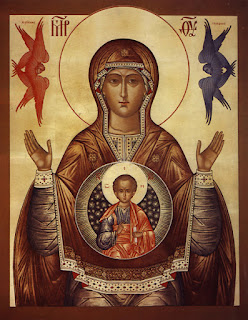 This is one of my favorite icons. Unlike icons in which Mary is looking down toward Jesus and holding him, such as in Our Lady of Tenderness, in this image, she is looking at the viewer, with her hands raised in prayerful supplication. In her lap is an orb, with Christ inside. Stars are behind him, signaling that he is the King of the universe, and as such, she as his mother is queen.
For many centuries, Mary has been called the Queen of Heaven and Earth by Catholics. The original basis for this title goes back to an ancient Hebrew tradition of Davidic kingship in which the mother of a king is considered a queen. In the Bible, King Solomon’s relationship to his mother accepting her as a powerful advocate is clear:

So, Bathsheba went to King Solomon, to speak to him on behalf of Adonijah. And the king rose to meet her and bowed down to her; then he sat on his throne and had a seat brought for the king’s mother; and she sat on his right. Then she said, ‘I have one small request to make of you; do not refuse me.’ And the king said to her, ‘Make your request, my mother; for I will not refuse you’” (1 Kgs. 2:19–20).

Bathsheba, the queen mother, has influence with her son as the second most powerful person in the kingdom. She wears a crown and sits on a throne at his right side. The reason that the king’s mother and not wife has the role of queen is that, in such times, a king could have many wives. Solomon had several hundred. But he only had one mother. The mother of the Davidic king held great authority over his decisions. Elsewhere the Scripture makes reference to the queen mother, such as the prophet Jeremiah: “Say to the king and the queen mother: ‘Take a lowly seat, for your beautiful crown has come down from your head. . . Lift up your eyes and see those who come from the north. Where is the flock that was given you, your beautiful flock?’” (Jer. 13:18, 20). The mother of the king is depicted as having a crown. The queen mother is an established part of the Jewish tradition as a powerful advocate.
As the Jews awaited a messiah, a king who would liberate his people from captivity, Jewish women hoped to be his mother, not only for the good of bringing such a deliverer to the Jewish people, but also for the power it would bestow on her. Hence, the mother of the Messiah, Mary, has been called a queen ever since the earliest times:

From the earliest ages of the Catholic Church a Christian people, whether in time of triumph or more especially in time of crisis, has addressed prayers of petition and hymns of praise and veneration to the Queen of Heaven and never has that hope wavered which they placed in the Mother of the Divine King, Jesus Christ; . . . Mary, the Virgin Mother of God, reigns with a mother’s solicitude over the entire world . . . (Pius XII,  Ad Caeli Reginam, section 1)

This passage also references Mary as crowned in heaven and reigning “with a mother’s solicitude” over the world. Just as Jesus’ kingdom was not of this world, nor was Mary’s. But many faithful have, for millennia, recognized her queenship as real nevertheless and seen her as a powerful advocate with her son.
This image of Mary reigning over the world, as the mother of the king, is such a strong reminder to me of the importance of every mother’s task in society. Mothers have the chance to influence our children well and bring them up in virtue, faith and goodness. They, in turn, will make the world a better place. As Pope Paul VI requested of families: “Build a civilization of love.”