Sebastian and Annie’s school was celebrating the 150th anniversary of the order that runs it. They are called the Sisters of the Most Blessed Sacrament (Santissimo Sacramento). They had Mass at the Holy Spirit Altar at the front of St. Peter’s, arguably the most beautiful part of the whole basilica. Sisters from around the world came and celebrated, and many students, parents and faculty from our local school attended–Sebastian, Annie and I included.
We were to arrive at the school at 6:30 am, a painful hour. Getting the children in the right places, then I went to the parents’ area where we were to catch our bus.
But at 6:45 am, before the sun had risen, 100 parents were shouting and complaining that the wrong bus had come. They waved their hands in the air, cigarettes lit between their fingers, shouting that a big bus had come for us, and the small bus for the children, and it was supposed to be the other way around. It was a typical scene that I have not completely assimilated to yet. Then a woman asked me what the woman shouting said. I told her in Italian, “The bus #8 is for 3rd, 4th and 5th grade parents.” She broke into laughter and said, “Only the foreigner knows where to go!”
The whole morning made a hundred bus trips on the Summer Rome Program with Ron in charge, all of which went smoothly, seem like a new level of accomplishment. 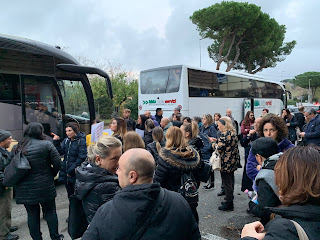 Then we made it into Rome, and workers were setting up a Christmas tree in St. Peter’s Square, something I’ve never seen in the summer. The school children were so happy and it was a really lovely time for all. 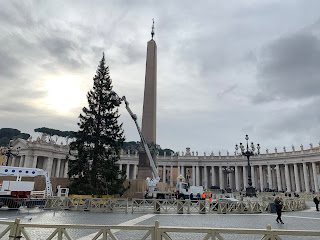 I saw Annie and gave her a sip of water from my water bottle. I then found Sebastian and tried to do the same. The nuns literally shouted at me that water bottles are not allowed in the basilica. I calmly responded that as soon as the bottle was empty, I would throw the bottle in the trash (just recently having learned the word for trash, and knowing full well that water is not allowed through security). But they still didn’t let the water touch his lips, so firm were they about the rule against water bottles on this trip. 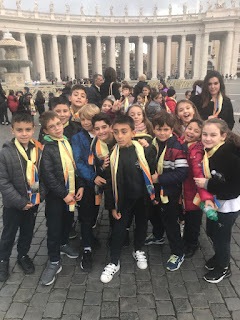 We entered the basilica, and had a beautiful Mass. I prayed for so many friends and family. The readings could not have been more poignant. The nuns from all over the world spoke in their own languages as they read the readings and the prayers of the faithful. One woman from Scotland prayed, “That the Church would continue to appreciate religious for their faithful service toward the revitalization of the Church.” I thought, “Yes, and mothers too.” God bless our Church!