The day has finally come!  Jake has his first computer.
Yesterday, Jake made his big announcement: he was creating a newspaper.  He and his friend Henry are co-general editors of their new publication, the Dallas Catholic News.  It is a monthly publication, with a team 5 staff columnists.  They are covering: government and politics, the economy and finance, Catholic news, current affairs, sports, and comics/games.  Jake is co-general editor, layout editor, and the finance columnist.
Jake is delving into the economy and finances on his own.  So his being the finance columnist will dovetail nicely with this new interest.  He has a true gift with economics–at 11 years old, he knows about as much as I did when I was a freshman in college.  I have told him most of what I know, and crazy–he follows it!  So he and I are pledging to read the Wall Street Journal together daily.
Jake has also perfected his handwriting, both in print and in cursive.  He writes 5 page documents routinely.  They are gorgeous.  If he decides to make a correction, he has to erase whole paragraphs.  So it is clearly time to move to typing: it is not to avoid learning good handwriting but to graduate to a new level! 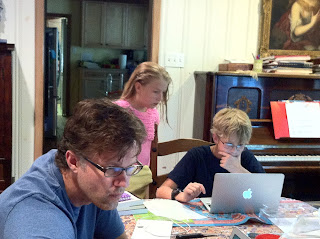 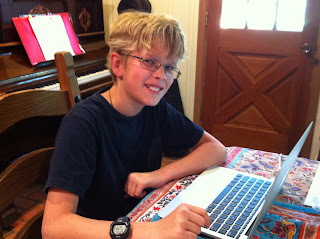