I’ve had such a great week with Leigh. 14 and wiser than most adults, I am hoping to be just like her when I grow up. 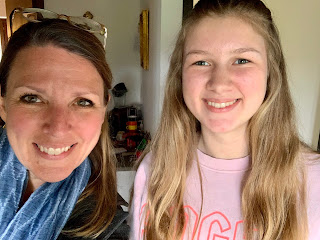 1) Leigh was my party co-host when I finished the very last edit to my book. That book that took me ten years to write. When I sent in the very last proofreading edit (the last one was a page # for a footnote), we popped open a bottle of chianti and celebrated (of course she only had a few sips). She spent half an hour asking me about the book, its target audience, what the process of writing was like for me. . . in short, she was as thoughtful as any other human being has ever been about this project. And she helped me celebrate the final moment of writing. Thank you, Leigh!

2) Leigh is also interested in enrolling in a Swiss school in Rome next year. It is bi-lingual, German and Italian. . . but mostly German! She is so unbelievably smart that she wants to start over with a whole new language, 2 in three years! She is a rockstar. The school said they are interested in her (they contacted us only last week!). I am helping her discern whether it is a good fit for her, and she and I are blazing through a German text book. Go Leigh! She is gifted with languages and just think of the IQ of someone who wants to start another language (in the sense of taking high school biology and history in this new language) in such short order! I feel the Goethe Institute is in her future. Walking alongside her in this journey is one of the high points of being a mother (and I’m getting a nice refresh on my German). I am in awe of this amazing human  being!