Happy Anniversary, Ron!  We will be married for 12 years this Sunday, and in common K. and R. Rombs style, we are having a three day anniversary extravaganza, rather than a contained dinner (after all, we are the couple who went on TWO honeymoons–do you all know that?  We changed our wedding date, and kept the originally planned honeymoon (in Turkey) and added another (in Paris) after the actual wedding!).
This year, in predictable thoughtfulness, Ron anticipated what would be most thrilling for me for a gift: he offered to make raised beds for my vegetable garden.  So we spent all day in lumber yards obtaining the wood, hardware and lining.  Mom and Dad had the 4 older kids, so it was a breeze. 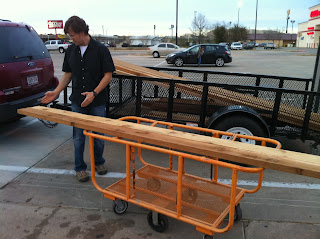 Then we had an anniversary feast–a picnic meal with Annie–take-in Thai food on the rec. room floor. It was an indulgent feast, talking about our 12 years.  The stories were as good as the food. 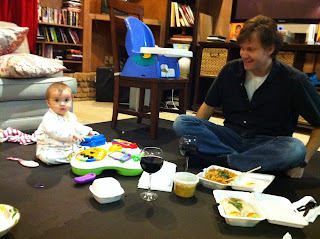 We had begun the day together over breakfast.  Ron asked me: “How many bottles of wine do you think are the equivalent to the amount of water turned to wine in the wedding feast at Cana?”
I said I imagined six jugs that were large, but whatever was standard for a wedding.
He responded: “900 bottles of wine.  Think about it.  If we offered 200 bottles of wine at our reception, that would have been a lot.  But He created the equivalent of 900 bottles, after much wine had already been drunk.  The point in John’s Gospel is how LAVISH Christ is with His gifts.”
This is Ron at breakfast–wow!  And look at how lavishly he worked for me the whole rest of the day on a vegetable garden that will probably completely fail.
A good man is hard to find.