I spent the day organizing homeschool curricula and this next semester, and I realized that on any given school day, I oversee 40 subjects!  Jake and Mary, 14 each, and Clare and Leigh, 6 each.  It made me feel so much better, since I had been down in the dumps about not getting through all of it often enough last semester.  Mind you, they are not general subjects such as “Math.”  Rather, they are sub-subjects, such as “Math workbook” and “Math facts drill.”  Each task is enumerated (so that we don’t forget any of them!).  But still, 40! 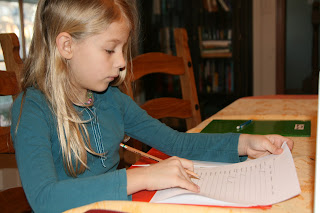 Amid the crisis of this discovery, Mary made the quote of the day.  We were memorizing a poem, “Christopher Columbus” by Steven Vincent Benet.  It begins:
“There are many queer things that discoverers do, but his was the queerest, I swear!”
After 19 wrong tries, Mary’s 20th attempt was: “There are many queers who discover things. . . .”
Not funny AT ALL, I know, but I laughed and laughed until tears streamed down my face.
Mary and Jake have NO IDEA what “queers” means; they must think their poor mother had cracked (which she had).